I stumbeled upon Abdul Mati Klarwein at The Summer of Love 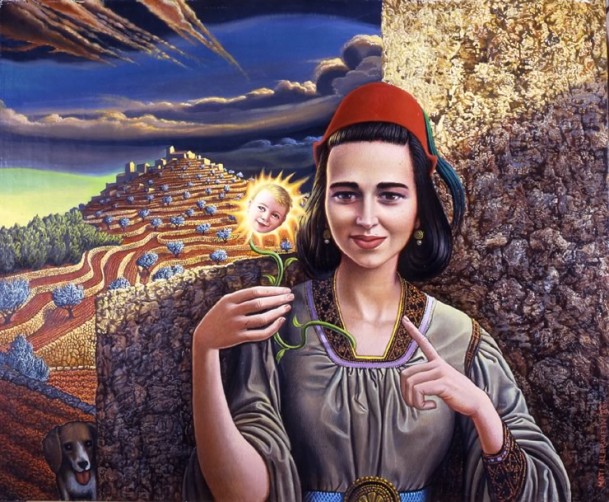 It was 2007 when I was riding the subway and an interesting advertisement had caught my eye. Too afraid to venture through Manhattan on my own accord, I had sought after friends to join me on the journey. But despite begging, nobody could “find” the time and there I was, left to make the decision of where my feet would lead me. Terrified of how quickly I’d get lost in a city I was still getting used to, I got on the wormhole underground to venture uptown to enter the land of the expansive minds.

The Whitney Museum was featuring an exhibit called “The Summer of Love,” (2007) and being the committed tree-hugger that I am, I knew I had to make an appearance.

I stood in front of the most magnificent piece of art I had ever seen. I traveled through the entire exhibit and there was a plethora of stuff that was “interesting” but this piece caused my walk to a halt. This piece was THE exhibit. The rest of the rooms could have been empty and I still would have paid to get in. I had made sure after drooling a while to be sure to jot down the artist’s name before I left because I would have to cut myself later if I had forgotten who, WHO it was that was responsible for such enormous beauty. I was having a perceptual orgasm. And I had to make sure I could have yet another with the help of Google later.

It was Abdul Mati Klarwein’s “Grain of Sand,” one of Klarwein’s most well-known and recognized pieces. The piece is a mesh of human reality, consisting of four different panels placed together. The composition together measured 6  ½ feet tall and wide. It’s a collection of many images, many making references to pop culture. To name them all is not only inconceivable, but no fun.

“For a long time I had wanted to paint a picture that you could hang up on a wall any which way, a rotating universe with no ups or downs.  I projected it as a sort of painted musical comedy movie with a Sanskrit swinging cast of thousands, starring Marilyn Monroe, Anita Ekberg, Ray Charles, Pablo Picasso, Brigitte Bardot, Roland Kirk, Cannonball Adderley, Ahmed Abdul Malik, Wonder Woman, Delacroix’s girl in the cemetery, Litri and his bullshit fighters, Florence of Arabia, Socrates, Dali, Rama, Vishnu, Ganesh, the Zork and a Milky Way of playmates.  It was 1962 and I had a special crush on Marilyn.” -Abdul Mati Klarwein 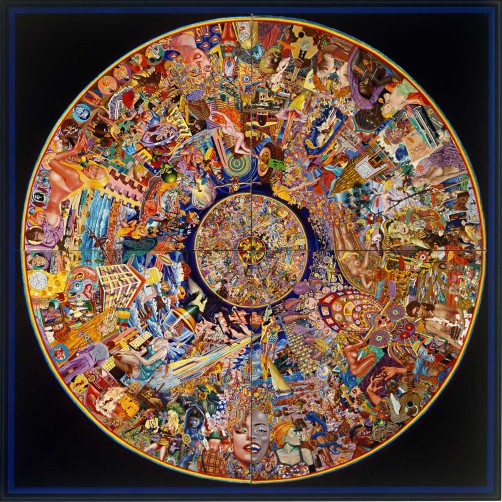 Named after German Renaissance painter Matthais Grunewald, Mati was raised by two very creative parents, his father, an architect and his mother, an opera singer. Born in Germany, he and his family had fled to Palestine when he was only two years old to escape Nazi persecution. Mati dropped out of school at the age of 15 and immediately entered an art college in Jerusalem where he began his career as a painter.

Mati has previously been called “pre-psychedelic era” because of the fact that it was not modern western culture that had influenced his work, but instead, it was his extensive travels from youth that gave him his perspective. While Mati did not deny that he had used psychedelics later in his life, even Timothy Leary, who was friends with Mati, had been quoted saying that Mati’s imagination and style had already been incredibly well developed and that “Mati didn’t need psychedelics.”

Originally known as Mati Klarwein, he adopted the Muslim name “Abdul,” as a peaceful gesture in light of the Israeli/Palestine conflict. Because Mati lived in many places as a child, he grew up with many different cultural influences, which are all very apparent in his artwork, as well as in his intricate landscapes. Painter Laurance Caruana explains that “the art of Mati Klarwein manifests, above all, a movement towards transcendence.”

“I grew up in three different cultures: the Jewish, Islamic and the Christian. These circumstances and my family’s stern resistance against being part of any kind of orthodoxy has made me the outsider I am today… That is also why I took the name Abdul.”

Commonly referred to as “the unknown famous artist,” Mati’s work has been featured as album art for many famous musicians. Artists such as, Miles Davis, Eric Dolphy, The Chamber Brothers, Santana, Buddy Miles, Howard Wales & Jerry Garcia, Earth, Wind, & Fire, The Last Poets, The Mooney Suzuki, amongst others, have had the privilege of having Mati’s work serve as the visual introduction to their musical compositions. 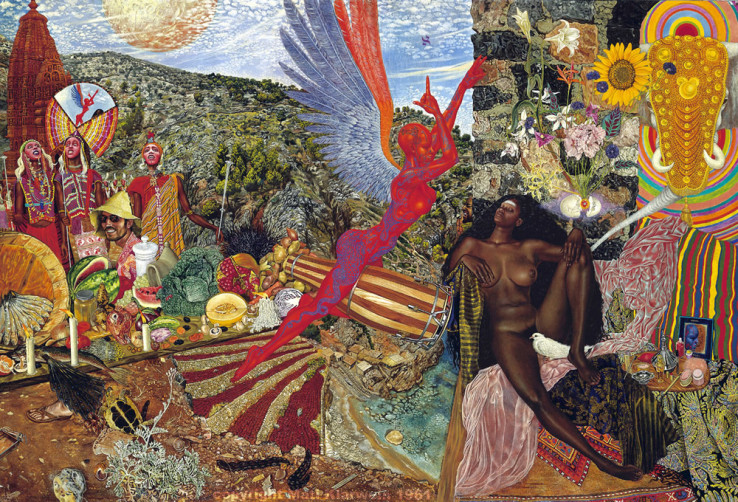 BACK AT THE EXHIBIT, my feet remained still, for I refused to move. I was ready to pitch a tent in front of this marvelous display of colorful images because walking away was a concept that my mind was not yet able to grasp at the time.  My eyes had wanted to sift through it all, the way a good mother meticulously prepares the flour for her famous apple crumb cake. It was something to be done patiently. It was a puzzle piece of wonder, created for the sake of careful examination. And while my feet remained gorilla-glued to the linoleum floor, despite other excited eyes trying to steal a glance, my head turned to discover this large cube-like contraption, only a few feet away, begging to be explored. Somehow, my curiosity had encouraged my stubborn feet back into movement and I began to gravitate from the space I was so certain I would never leave, towards the radiating, colorful structure.

Feeling like I had stepped into a miniature holy temple, I stood in the luminous Aleph Sanctuary structure and with a single gasp, my breath was stolen away, Never To Return Again… 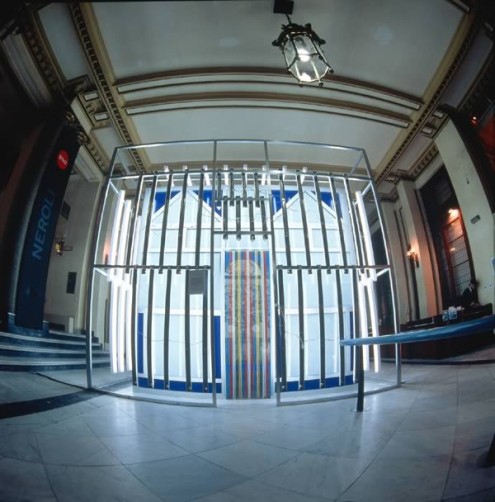 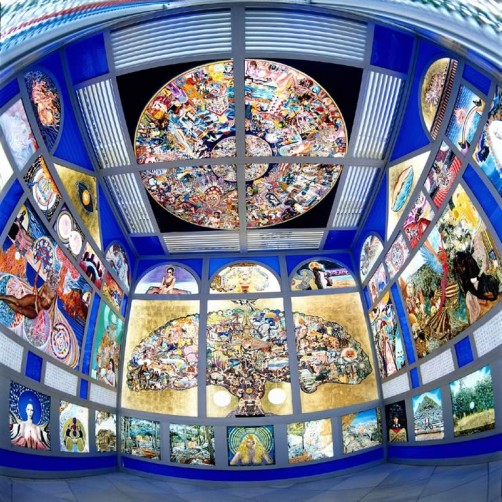 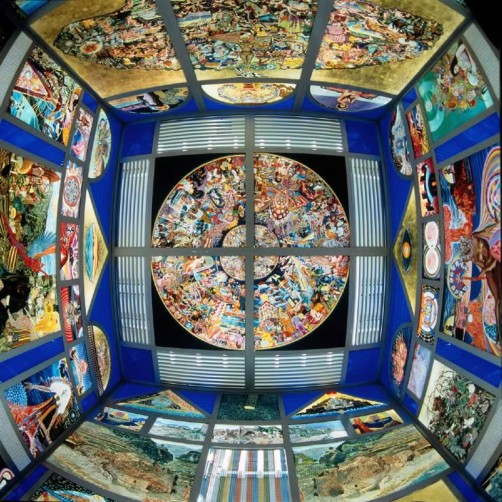 After Mati moved to New York, he created the Aleph Sanctuary, which was a structure that measured 3m X 3m X 3m, approximately 10 feet,  and featured 78 paintings in the interior, making it a spiritual experience for anyone who walked in, for paintings literally surrounded you. This structure was originally built between 1963 and 1970 and was later rebuilt and replicated in the year 1992, using Plexiglas reproductions of the paintings which were then illuminated by fluorescent bulbs.

One could look at Mati’s work and constantly find new details to plunge into. His fascination with art and his dedication to his precise work exemplifies the type of person Mati was. He had a worldly perspective and he once explained that, “I am only half German and only half Jewish with an Arab soul and a African heart.” Through visually drowning in his work, through reading interviews, and through skimming through his “Improved Paintings” Collection, one can easily gather that he was a man with a humorous and humble heart and that life to him was a blessing, and his art, a playground in which to play in.

Mati remains a man of great inspiration and spiritual and creative vision. He has inspired and affected many individuals, musicians, painters, artists, and DREAMERS. (Even Alex Grey is known to be very fond of Mati.) To some Klarwein remains a man with no name at all. For his visions matter more than the letters and words that create his name. And although he has left us, his soul continues to thrive, captured within the fine brushstrokes of his intricate work.

“I wish the world so peaceful that the headlines of its leading daily paper could read: DOG EATS NAPKIN IN SLOW MOTION.”