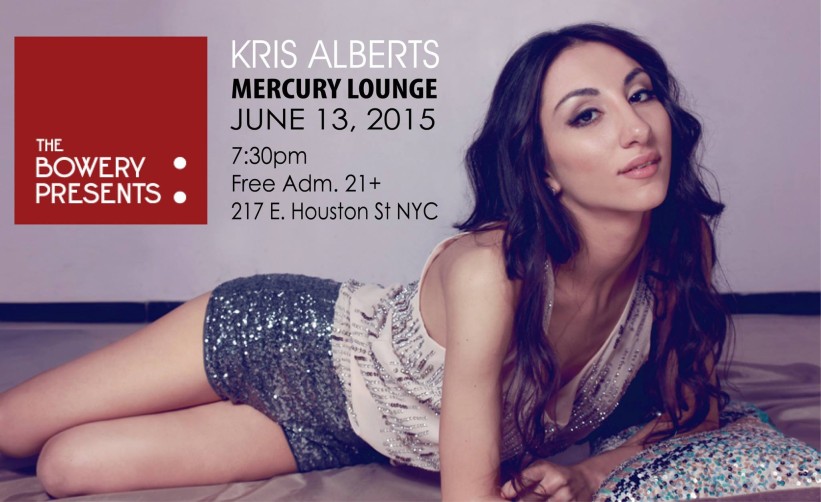 Charming and glamorous with a voice that astounds and a stage presence that can only be compared to that of a goddess, Kris Alberts is a singer and performer that is sure to leave you feeling mystified. Having just released her debut album “Not Gonna Lie,” Kris and I had the pleasure to sit down to discuss her inspirations, her creative process and just exactly how her new album came together.

Her single “Favorite Mistake” is available on Itunes now!

What served as the main inspiration for your debut album?

My life, really. It’s really personal. I write about what I’m going through or what I see happening around me. Pretty much like a diary set to music. Whatever is on my heart or on my mind. It’s so close to me and really honest, hence the title of the album “Not Gonna Lie.” It’s kind off scary but also so amazing to have such an honest record out there. I myself relate to music with personal and honest lyrics. What’s personal is universal and I know that people will relate to this record. 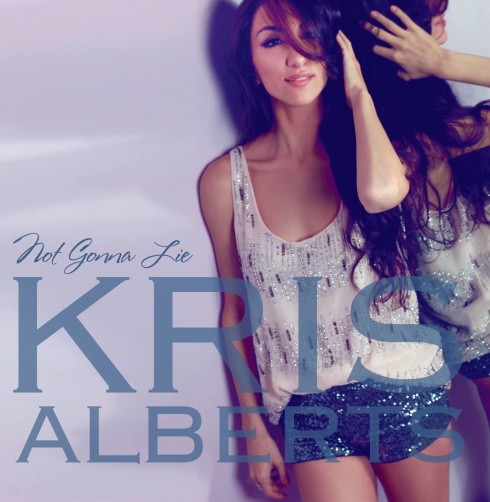 What about it stands out and how is it different from the music you’ve done in the past?

This is the first time I’m releasing a full record of my original work. So much hard work went into creating this. From the incredible musicians I worked with to my producer and my creative partner and manager Julie. This whole production was like nothing I’ve ever done before and I’m so thankful to have had the music and lyrics that I wrote come to life the way that they have.  The sound is so true to who I am and is really authentic. I haven’t really heard anything out there now that sounds like my music. I think it’s a good blend of a catchy pop sound but it has my own flavor to it and elements of music styles that have inspired me growing up.

Was there ever a defining moment in your life where you said, “Ah yes, this is what I was born to do!”?

I can’t actually remember a time when I didn’t know I wanted to perform for the rest of my life. I grew up around music. My parents were performers, my sister is in that world and I was always drawn to this life. Anytime I would come off stage after a performance and would close a show, that feeling was indescribable. All I ever wanted was to do it again. I can’t imagine a life where I’m doing anything else. 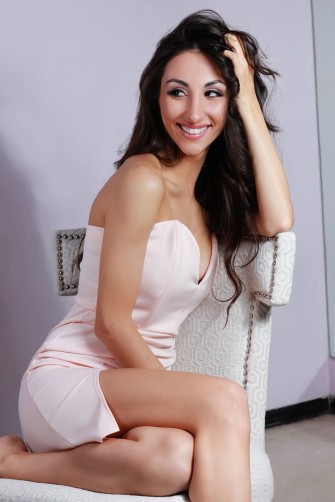 Who has been your biggest musical influence and why?

I grew up in the 90’s and early 2000’s. I would lie if I said I don’t love a good pop song. Mariah Carey, Whitney Houston, Christina Aguilera – I looked up to these amazing pop vocalists. But because I grew up with mom and dad who performed in both the classical and contemporary music world I was introduced so many types of music. Jazz, R&B, Rock & Roll and Pop. Earth Wind & Fire, ABBA, Stevie Wonder,  ACDC. Music from everywhere really. I’d say that my parents really influenced me most musically. They introduced me to this world and I found my own sound when I started writing.

If you had to choose between music and theater which would you say is your true love? Which one did you fall in love with first?

I almost hate this question, haha – Because it’s asked so often! Why do I have to chose? I hope to live in a world where I never have to chose. They’re so different. In the theater/acting world you are becoming someone else and living in that world and making that a reality for your audience. Singing and recording my own music, it’s all me and my truth. Both are so magical. But I really don’t see a world where I’m not singing, haha.

What was a moment of revelation that stands out pertaining to your musical journey?

I’ve had so many incredible moments that really told me that I’m doing something right and I’m so thankful for that. Most recently with the release of my single “Favorite Mistake.” I’ve had my own friends quoting my lyrics in their Facebook status, haha. That was a big one for me. They were relating to my writing and it really felt like..”Oh okay.., this is silly but it actually feels amazing.”

Discipline as an artist can be difficult to grasp. How did you manage to structure your life around your art and stay so committed? What was the fuel that kept you going?

I really have my parents to thank for that. They saw I was passionate at something, I was good at it, and they let me revolve my life around that. From dance schools to music schools, I went to a performing arts high school then a music theater conservatory and then dove into trying to make it in this crazy world. They stood by me and never tried to make me do anything else. They pushed me and just really helped. I have a really amazing support system. All my family and friends, they keep me going. Their support is absolutely everything to me. I love music and performing way too much, there is no plan B, there is no other option. I am a very optimistic person so I’m counting on a bright future. 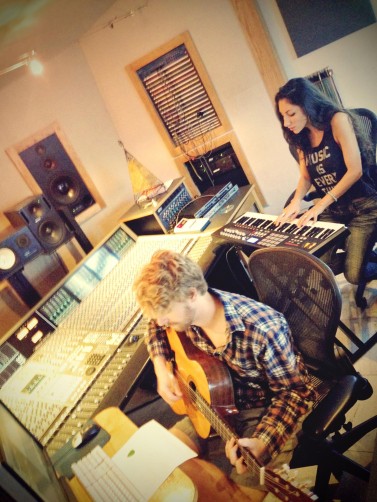 Was there anything you had to sacrifice to pursue your goal to be a musical artist?

I wouldn’t say I had to sacrifice anything. There may have been a recital instead of a birthday party or a music class instead of a school dance, but I loved doing what I was doing. I got to do what every regular kid does, plus I got to live this amazing life where I learned and performed and had so much fun.

How do you manage in times of self-doubt?

I get impatient and I get down on myself sometimes but luckily I have a lot of people around me that I can talk to and that can cheer me up. I just give myself a pep talk. Remind myself that I am talented, I have something to offer and I am worth the dream that I have.

Who and what is your support system?

My amazing family and friends. I am so blessed to have some really special people in my life that inspire me and encourage me endlessly. For so many years they stood by me and cheered me on as I embarked on this crazy path. They are my biggest fans and biggest cheerleaders. And I have been so lucky to be gaining a fan base with this new album coming. I am so thankful for these new fans and friends I have made that are showing support.

What have you done in situations of negative criticism? Has it ever affected you in such a way that you gave up and if so, what inspired you to try again?

You have to have a really thick skin to be in this industry. I think I do, You get ignored so many times, you get so many ‘no thank you’s.” It gets really hard, it does. There is always someone “better” than you. But like I said it’s important to know your worth and to cheer yourself on. I’ve had moments where I’m like OK  maybe I need to rethink things, but that doesn’t last long because there is nothing else in this world I want to do. 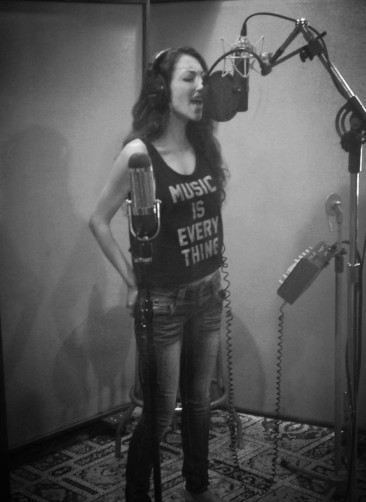 Kris in the studio laying down the vocals like a boss!

How is your hair always so fabulous? 🙂

Hahaha that’s the best question, thank you! I’d like to say I have some good genes, haha. Mom and dad did good but I promise it does not always look fabulous.

Do you find your artistic process to be therapeutic? Are there ever moments it becomes frustrating? How do you manage when you find yourself getting impatient, upset, tired or indecisive about how to move forward?

Absolutely. Normally you’re feeling down and you write about it in your journal or something. I’ll just pick up my guitar and write a song. It’s the perfect release.  If something isn’t working out right away I try to just relax and be patient. Give myself some time to figure things out or figure out a different way to go about doing something. In this world everyone is constantly critiquing you so even though usually I’m my own worst critic, it’s important to tell yourself “It’s gonna be ok. You’re good. Relax.”

What is your creative process? It is smooth or do ideas flood your mind chaotically? Is it exciting? How do organize your creative ideas? What is your process in terms of song production? What comes first, the lyrics or the music?

It’s always exciting but it’s never the same. Sometimes I’ll think of a lyric first, sometimes I’ll play around on the keys and fall in love with some specific chord progression. Usually once I start it’ll just flow. Sometimes I’ll write this great hook or something and then get stuck. But it’s all about patience and digging deep, haha. But when a song comes together, it’s really, really awesome.

What is your life perspective and how has that impacted your music?

I’m super optimistic and I think that’s the way you need to be. There’s enough negativity around. Be connected to your emotions, let yourself go, but just remember no matter what you’re feeling, everything will work out the way it’s supposed to.

What sort of an audience do you hope to reach? Is there anyone you seek to influence and is there any message you would like to share with your fans?

I just hope all different people can relate to my music: Girls, guys, teens, young adults. I hope to reach people like me that have felt these emotions and feel connected to me in some way because they hear my songs. I am so proud of this record and I really hope everyone has a lot of fun with it.