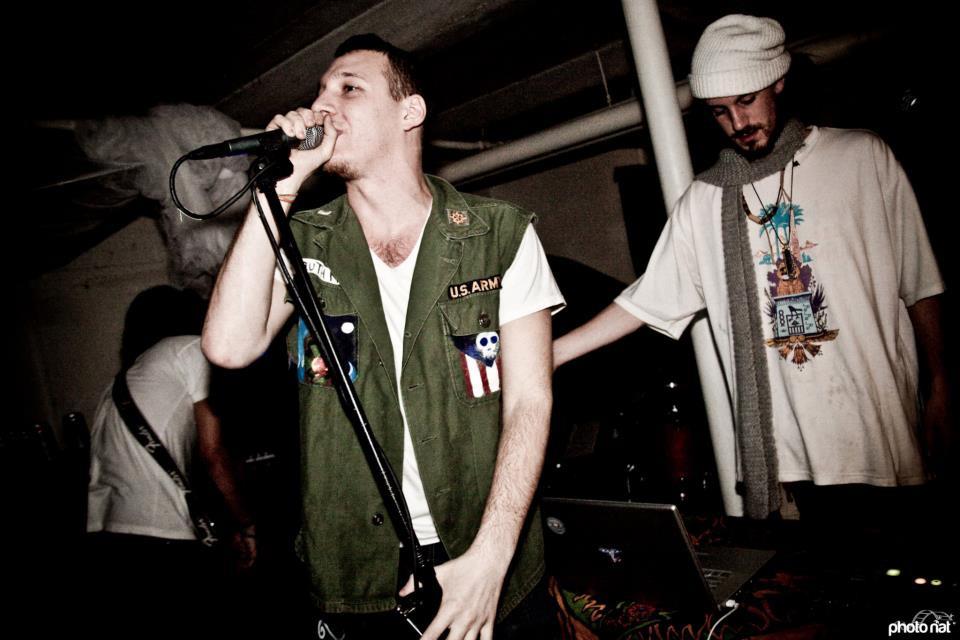 Sitting on the steps of Union Square in my fringed suede vest with the beaming sun floating above me, I awaited to meet someone who just as proudly wore their own political statement. With his dirty blonde hair, goatee, and green vest with a Korean War era US ARMY patch on one side and a “Truth Now” patch on the other, I finally shook the hands of, and was embraced in the arms of, G. Freeman, also known as NYC independent hip-hop artist “Truth Now.” Activist, musician, and spiritual seeker, this man is both honest and empathetic, controversial and unapologetic, wise and acutely aware of the world and his surroundings.

Raised in the suburbs of New York City, and taking a liking to rap, he says he felt his first “stage high” when performing an original hip-hop piece in his eighth grade history class. With a mother who taught Special Education, he says that “I was raised in a household that valued humanity.” Aside from his own “cross-pollinating experiences” and strangely symbolic dreams, he said that 911 was also crucial for his awakening. He dropped his first album Karma Alarm in 2010 and presently continues to compose and enlighten. One of my favorite compositions is a remix called “Water Back,” it features Raymond Norwood, Azitiz, and the producer; Srikala. The song celebrates the sacredness of water and raises questions about the process of hydraulic fracturing (“Hydro-Fracking”), a form of natural gas extraction, that contaminates the groundwater. Unlike the common and hateful themes associated with today’s popular “gangster rap,” Truth’s rhymes are a lot more genuine and consist of personal awareness, unity, and many controversial political issues. He seeks to bring to light various perspectives on a political, social, and individual level.

As he takes a seat on the step next to me, we begin talking about people, about society. “We don’t talk to each other in this city mostly, but I like to fuck with that,” he says. Not only through music, which he explains is a tool to start conversations, but simply by learning and encouraging oneself to partake in the human community; to interact with others. As he begins to explain that “I like weird people,” because they stand out from “the drones”.., he stops mid sentence:

“Like there. Right there. That beard. I would talk to that guy. Not necessarily about beards but you would know that beard has seen some shit. It’s long enough to tell me that he is probably three times as wise, and maybe three times as bat-shit crazy, but that would still be interesting. Yeah. He’s three times something (more) then everybody else younger than him.”

While it’s common to enjoy meeting people who share one’s particular perspective, Truth likes to challenge himself: “I hope somebody disagrees with me and has a conversation with me about it. It’s really interesting for me to take someone else’s perspective and see what bridge I could build to them, see where our human denominator is.”

I wondered what challenges Truth faced as an underground artist. Recognition comes effortlessly for someone who is plastered all over the media. But how did this work for someone who had to manage within his own local network? He bounced back with the response that it’s actually been a pleasant surprise to see that an independent “cat” can actually do really well for themselves. Although the idea of having a record deal may appear rather appealing, Truth explains that often times, “the artist is completely disrespected and owned.” Often times artists find themselves in debt due to the luxurious life they are encouraged to live. But as one soon learns, “Nothing about that is sustainable. No artist can live like that forever.”

Understanding the common fear many people hold towards liberating their emotions in a creative way, Truth gives a simple explanation of this pivotal human element: Whether or not the art that results is pretty or ugly is irrelevant. He explains that,

“It doesn’t matter because the act itself is beautiful and will inspire other aspects of your life.”

Before our moment of intellectual exchange was about to terminate, I had to ask him one more question: “What do you think the world is missing?” I asked, both curious and eager to hear his response. He looked ahead to contemplate for a moment and said,

“I would say nothing. The world has everything. What I think PEOPLE are missing is remembering. People don’t remember anymore. They think that they were born once and that they’ll die once. Which is..,” he pauses to laugh, “hilarious… If they remember that they’ve been here before, then they’ll remember another perspective. They’ll remember something that worked for them in the past. Something they could access.”

Luckily for me, coming with the same spiritual beliefs, I understood. What Truth was talking about was a different type of ancestry. Not one referring to places on a map. Ancestry, in the sense that, this human life, is not the only form of existence we’ve experienced. That we have died before and were born again: Reincarnation. He goes on to say that by Remembering, “You’ll build a pyramid. You’ll do exactly what you need to do.”

As I watched him leave I noticed two words written in red paint on the back of his vest:

Be sure to check out TRUTH NOW in our Ayahuasca Sessions video, which is a collection of interviews educating the masses about the power of the South American sacred planet medicine