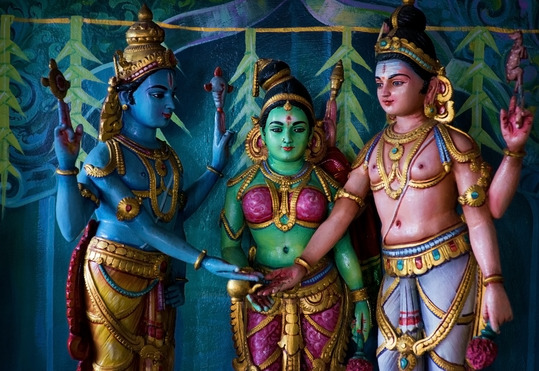 Have you ever wanted to stomp your feet, pout and just settle upon the ground to watch the world wander by? I have, probably more often than I should admit, when life gets busy and convoluted you tend to forget your original intentions and lose sight of your goals. You simply want to sit silently and fade into the background because life is too difficult.

You’re not alone. Characters across the cultural spectrum have grappled with their inability or disinclination to make a choice. Be their reasons morally, ethically or personally motivated, many have chosen to simply stand down, to set on their proverbial sidewalks so to speak.

Sometimes we face problems that seem to have no clear, correct answer – these are called moral dilemmas. Many of the world’s Great Books deal with these quandaries and troubles; classics such as Great Expectations deal with moral depravity, the Iliad tackles the horror of war while others such as Tristan and Isolde discuss the power of love.

The Bhagavad-Gita, one of the main texts of Hinduism, deals with one such prominent moral dilemma. The story is set against the Kurukshetra War, a conflict that occurred between two great families, the Pandavas and the Kauravas. Both groups are locked in a vicious and violent struggle to rule the Kuru kingdom and gain the throne of Hastinapura. But notice, how that is the backdrop for the plot – like other spiritual texts the Gita has a deeper meaning to prove than the savagery of war.

Arjuna, one of five Pandava brothers, the acclaimed and admired warrior, is a principal player in the piece. He is confronted by the fact that if he chooses to fight the Kauravas he will also be killing his kinsmen, because the Kauravas are his cousins.

Arjuna is caught between a rock and a hard place – his choices consist of losing the war which would mean he and his brothers die or fighting the war and effectively killing his other kinsmen.

But Arjuna elects instead to create a loophole – he contemplates doing nothing. Since when is choosing not to choose a choice? Well, in theory it is a decision; however, it is sort of the coward’s way out. While there are times when it is appropriate to stay clear of deliberations, solutions and possibilities, war is not one of those times. War concerns the lives of living, breathing people – the innocent and the guilty both bleed red.

The plot here is thick, complex and this explanation barely covers the depth of the Gita. When I first read this text I was as lost as Neville’s toad Trevor on the Hogwarts Express. I felt completely confused, because I could sense the power and gravity of the words I was reading but I simply could not grab a firm hold of the verses’ intentions.

To put a modern twist on this conflict and diffuse it of some tension, Arjuna can be equated with the Indie music movement – while the Kauravas can be associated with the immense wave of pop music that is overloaded on the airwaves.

While I’m not against anything grouped under the label of Top 40, in fact at times I favor it, it is not inaccurate to state that it dominates a large range of radio stations. Just like the Kauravas, pop music is everywhere at the same time, and it’s set on crushing its seemingly smaller and inferior adversary, the indie scene.

Nevertheless, despite the persistence of the Kauravas to eliminate the existence of the Pandavas a saviour of sorts appears. Krishna, a Hindu deity, takes upon himself the humbling task of being Arjuna’s confidant and charioteer. He appeals to Arjuna to fulfill his dharma (duty) as a member of the Kshatriya or warrior caste – he urges the young man to fight.

This text deals specifically with the concept of svadharma which translates loosely from Sanskrit to “personal sacred duty.” We all have a purpose. Despite the insufferably cliche use of this phrase, I ask you to look beyond the modern idea of “fulfilling our purpose in life.”

You do not need to become eternally happy, extremely successful or look exactly like a model – you just need to know yourself; you need to fill the hole in the world that ONLY you can fill.

Your career comes with expectations, if you’re a teacher you’re expected to educate people, but that’s part of your dharma; it’s only part of your duty as an educator. Your personal sacred duty is about you and what you can contribute to the universe, but you must bring both into alignment in order to fulfill your destiny.

Don’t be intimidated by the term destiny, yes, it’s full of cosmic unconsciousness but it’s also just a word. We all have a destiny and a duty; don’t shy away from them, because then you’re only shying away from yourself if you do.

Krishna’s counsel leaves Arjuna at a loss; he feels stuck between doing his duty and doing the right thing. Much like an indie label band may be tempted to sell out to a large record company for better recognition and more financial security, the warrior is confronted and confused by his options.

This ancient text puts out a call for selfless action; Krishna is present to draw attention to the idea of making decisions without being obsessed with the outcomes of said choices.

Being selfless is about being unattached to the potential results of your actions – that does not mean you are uncaring – it means that you’re motivated by more than pride or avarice. We should be driven by the need to do our duty, no more and no less.

This type of lifestyle overhaul does not happen overnight. And you must stay conscious of the fact that even when you’re trying your best to do your duty you will mess up and make mistakes. When you’re feeling down, despaired and dejected recall these words from the Gita, “No effort in this world is lost or wasted.” (The Second Teaching, Verse 40; Barbara Stoler Miller translation.) So, you see the only true failure is not to try at all.

The Gita is an intricate and thorny text – it’s full of spiritual guidance and wisdom that can never be fully and wholly understood. But much like music, it has a variety of interpretations – there are of course, personal meanings attached to certain passages along with the traditional scholarly connotations. Take a chance; dive into the depths of the Gita and discover your own profundity along the way. I won’t blame you for sitting on the sidewalk every now and then but just make sure it doesn’t become your throne of apathy.